God, Thank You For The Fleas

By Mornings with Rebecca & Burns November 22, 2019 No Comments

*This article was originally published by Vance Christie*

Corrie and Betsie ten Boom were courageous, compassionate Dutch Christians who helped harbor Jews from the Nazis in Holland during World War 2. After the sisters were arrested for doing so, they were imprisoned at Ravensbruck, a German concentration camp.

Below is an excerpt from Corrie Ten Boom’s book, “The Hiding Place” where she details her experience in a German Concentration camp during the Holocaust.

“In their barracks, they were shown to a series of massive square platforms, stacked three levels high and placed so close together that people had to walk single-file to pass between them. Rancid straw was scattered over the platforms, which served as communal beds for hundreds of women. Corrie and Betsie found they could not sit upright on their own platform without hitting their heads on the deck above them. They lay back, struggling against nausea that swept over them from the reeking straw.

Suddenly Corrie started up, striking her head on the cross-slats above. Something had bitten her leg. “Fleas!” she cried. “Betsie, the place is swarming with them!” Descending from the platform and edging down a narrow aisle, they made their way to a patch of light. “Here! And here another one!” Corrie wailed. “Betsie, how can we live in such a place?”

“Show us. Show us how,” Betsie said matter-of-factly. It took Corrie a moment to realize that her sister was praying. “Corrie!” Betsie then exclaimed excitedly. “He’s given us the answer! Before we asked, as He always does! In the Bible this morning. Where was it? Read that part again!”

Corrie checked to make sure no guards were nearby, then drew from a pouch a small Bible she had managed to smuggle into the concentration camp. “It was in First Thessalonians,” she said, finding the passage in the feeble light. “Here it is: ‘Comfort the frightened, help the weak, be patient with everyone. See that none of you repays evil for evil, but always seek to do good to one another and to all. Rejoice always, pray constantly, give thanks in all circumstances; for this is the will of God in Christ Jesus …’ ” (1 Thessalonians 5:14-18).

“That’s it!” Betsie interrupted. “That’s His answer. ‘Give thanks in all circumstances!’ That’s what we can do. We can start right now to thank God for every single thing about this barracks!”

Corrie stared at her incredulously, then around at the dark, foul-smelling room. “Such as?” she inquired.

“Such as being assigned here together.”

“Such as what you’re holding in your hands.”

Corrie looked down at the Bible. “Yes! Thank You, dear Lord, that there was no inspection when we entered here! Thank You for all the women, here in this room, who will meet You in these pages.”

“Yes,” agreed Betsie. “Thank You for the very crowding here. Since we’re packed so close, that many more will hear!” She looked at her sister expectantly and prodded, “Corrie!”

“Oh, all right. Thank You for the jammed, crammed, stuffed, packed, suffocating crowds.”

“Thank you,” Betsie continued on serenely, “for the fleas and for …”

That was too much for Corrie. She cut in on her sister: “Betsie, there’s no way even God can make me grateful for a flea.”

“ ‘Give thanks in all circumstances,” Betsie corrected. “It doesn’t say, ‘in pleasant circumstances.’ Fleas are part of this place where God has put us.” So they stood between the stacks of bunks and gave thanks for fleas, though on that occasion Corrie thought Betsie was surely wrong.

As the weeks passed, Betsie’s health weakened to the point that, rather than needing to go out on work duty each day, she was permitted to remain in the barracks and knit socks together with other seriously-ill prisoners. She was a lightning fast knitter and usually had her daily sock quota completed by noon. As a result, she had hours each day she could spend moving from platform to platform reading the Bible to fellow prisoners. She was able to do this undetected as the guards never seemed to venture far into the barracks.

One evening when Corrie arrived back at the barracks Betsie’s eyes were twinkling. “You’re looking extraordinarily pleased with yourself,” Corrie told her.

“You know we’ve never understood why we had so much freedom in the big room,” Betsie said, referring to the part of the barracks where the sleeping platforms were. “Well—I’ve found out. This afternoon there was confusion in my knitting group about sock sizes, so we asked the supervisor to come and settle it. But she wouldn’t. She wouldn’t step through the door and neither would the guards. And you know why?” Betsie could not keep the triumph from her voice as she exclaimed, “Because of the fleas! That’s what she said: ‘That place is crawling with fleas!’ ”

Corrie’s mind raced back to their first hour in the barracks. She remembered Betsie bowing her head and thanking God for creatures that Corrie could see no use for.” – The Hiding Place, Nov. 1971

May our own hearts and lips overflow with gratitude this Thanksgiving season and throughout the year. Even when faced with deeply trying and discouraging circumstances, we can identify numerous blessings that the Lord continues to pour into our lives. Some of those blessings come as a result of the difficulties we’re facing. As we focus on the Lord’s blessings, we will be heartened and enabled to persevere through life’s discouragements. And we’ll never fail to appropriately honor God by thanking Him for His ever-present blessings. 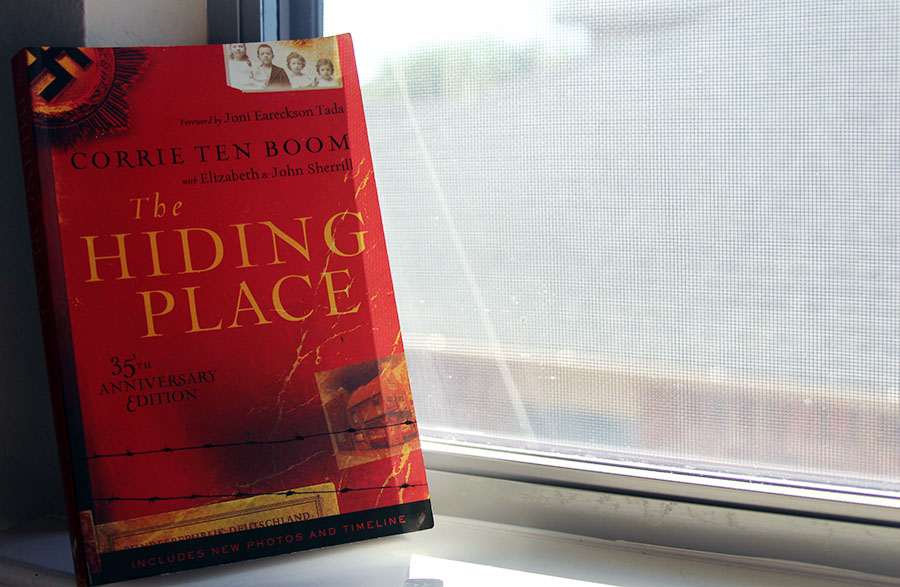 You will find this and many other inspiring incidents from the life of Corrie ten Boom in her own book, “The Hiding Place“. You can buy the book here!

5 Ways You Can Turn Crisis Into Opportunity

Don Remembers His Father Who Passed Away 5 Years Ago Today