Man Surprises Future Wife By Including Stepdaughter In The Proposal!

By Mornings with Rebecca & Burns August 6, 2019 No Comments

*This article was originally published by Samantha Brodsky at Good Housekeeping*

When Grant Tribbett woke up on the morning of Saturday, May 27, he was ready to propose twice: once to his girlfriend, Cassandra Reschar, and once to her little girl. While some wedding proposals can go terribly wrong, this one really did play out flawlessly. It was downright perfect.

According to Reschar’s How He Asked post, the couple met through Facebook around seven months ago. “As a single mom, it was always a nightmare trying to date as I have full custody of my daughter and very little ‘me’ time,” she wrote. But the two hit it off after they started messaging back and forth, a conversation prompted by Tribbett’s comment about one of her statuses (bold move).

They tackled obstacles such as distance, but, as Reschar wrote, “…with all the life challenges that were brought our way, we have only come out stronger and more in love with one another.”

She continued, “I have gotten to witness an attractive, charming bachelor become a positive, loving and utterly the most selfless father to my little girl.”

The week of the proposal, Tribbett suggested his future fiancé get her nails done. Then, the morning of the big day, he took her and her daughter Adrianna to breakfast, then to Ritchey Woods Nature Preserve not far from where they live in Indiana.

After walking a mile (in heels, no less, Reschar added), he got down on one knee for what she described as one of the best moments of her life.

What came next shocked both Reschar and her daughter: Tribbett popped the quintessential question to Adrianna. “He said, ‘Adrianna can I be your daddy, to promise to love and protect you for the rest of your life?'” Reschar wrote in her post.

The girl’s response? A bewildered, “Thank you!” (“She has always been raised to use her manners when given a gift,” added her mother.)

Tribbett presented Adrianna with a heart-pendant necklace, which, according to Reschar, was a symbol that her daughter “now carries a piece of his heart with her.” (Cue the tears.) 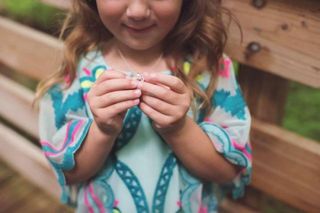 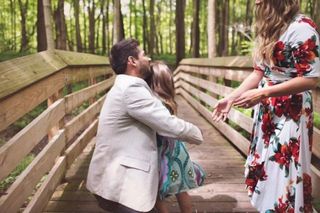 “I knew before our first date that Cassandra was a full-time, devoted single mom,” Tribbett told GoodHousekeeping.com. “Honestly, it was one of the many qualities she has that captured my heart. As we moved forward in our relationship, it only became that much more apparent that these two were the missing pieces in my life.”

“I knew proposing to Cassandra, that I also would be committing to a lifetime of fatherhood,” he continued. “So what better way to ask the love of my life to marry me, than to ask her beloved daughter to get the honor to be her daddy?”

“I’ve known Cassandra for about five years now, watching the ups and downs of [her] being a single parent and so desperately wanting a family and a father for Adrianna,” Gilliland told GoodHousekeeping.com. “Once Grant reached out to me and expressed what he wanted to do for Cassandra and Adrianna, I was beyond ecstatic! He truly stepped up and has loved [Cassandra’s] daughter as if he had been doing it for his entire life.”

“It was such an honor getting to capture this for her, and I cannot think of anyone more deserving!” she continued.

The Knot shared Reschar’s How He Asked post on Facebook, and people everywhere are just as touched as we are.

CAN'T STOP CRYING over this sweet story from How He Asked:"After proposing to me, Grant got back down to propose to my…

“Omg! Tears are flowing! It takes a man to step up and take care of kids that are not his own and bring them into his heart and life and say, ‘You’re my child, and I’ll love you and protect you ’til I die!'” commented one user. “Every time I read this, I love your story more!” wrote another.

“My daughter and I both got our fairy tale ending,” Reschar concluded her How He Asked post.

One thing’s for sure, Tribbett didn’t just land the princess of his dreams, he landed two.

Do you love this? Want to see more? Consider becoming an iPartner with KCBI! GIVE NOW

If you want to catch Jeff & Rebecca’s podcast daily, you can always subscribe on Apple Podcasts, Google Play, Spotify, iHeartRadio, Stitcher or Soundcloud! Just click the buttons below! Also, don’t forget to rate and review to help the podcast get found by others!

How To Disagree Agreeably

Fighting For Closeness With God

When Famous Christians Lose Their Faith