By Mornings with Rebecca & Burns August 14, 2019 No Comments

*This article was written by Sharon Hodde Miller for Christianity Today*

God did not call you to be nice. This statement has been rattling around in my head for well over a year now, and I haven’t been able to shake it. It has reemerged at crucial moments, not as an excuse to be snarky, angry, or rude, but because I have noticed something going on in my heart, and in the church, for a while now: A competing allegiance. A warm and inviting idolatry that has managed to wedge itself between us and true obedience to Christ.

For as long as I can remember, I have loved to be nice—not just loved but needed—and it is an identity I have struggled to leave behind. I want to be accepted, and I want to be embraced. As a lifelong nice girl, I have not only felt this pressure but I have also caved in to it often. The need to be nice has influenced my ministry as well as my relationships. I have backed away from hard conversations or softened my convictions, opting instead for the wide gate of niceness.

“Niceness” is a form of superficial kindness that’s used as a means to a selfish end. I identify it as an idol in my life because I have served it tirelessly, and it has served me well in return. My devotion to it has won me a lot of acceptance and praise, but it has also inhibited my courage, fed my self-righteousness, encouraged my inauthenticity, and produced in me a flimsy sweetness that easily gives way to disdain.

As I look beyond my own heart, I see this same phenomenon everywhere. Niceness has become a social currency in our culture, one that we value highly without ever really realizing it. I once discussed this topic with Christina Edmondson, dean of intercultural student development at Calvin College and cohost of the podcast Truth’s Table, and she remarked that “we are wooed by superficial niceness. Satiated by it.” We will forgive all manner of ills in a person we deem to be nice. We use niceness to grease the wheels of our social interactions. We employ it like a ladder, helping us to scale the heights of our career. And for many Christians, following Jesus means we are just really, really nice.

The friend who says a hard thing that we need to hear, the pastor who holds us accountable, the leader who disrupts the status quo—these not-nice behaviors are frequently met with swift rejection and even rage. Friendships end. Church members leave. Social media burns with outrage. These kinds of reactions tell us something about the role of niceness in our culture. It isn’t just a social expectation—it’s a sacred cow.

When we turn to it for promotions in our workplace, preference in our community, and power in our ministry, niceness is no longer a harmless social default but an alternative god whose promises compete with Christ. In sum, it stands between us and obedience.

So, how did we get here? And what does niceness mean for our Christian witness?

Going back to ancient times, virtue has traditionally referred to a particular moral good. In Plato’s Republic, the philosopher names four classical virtues: wisdom, temperance, courage, and justice. These virtues are not merely about doing the right thing—they’re about doing it for the right reason. Plato describes virtue as “the desire of things honorable,” which means we are motivated by a greater good outside ourselves.

Niceness, on the other hand, aims small. In her book American Niceness, author Carrie Tirado Bramen describes niceness as a virtue of “surfaces rather than depths,” while Philip Ryken, president of Wheaton College, calls it “a trivial virtue that is easy to fake.” Niceness is concerned with the appearance of goodness and not the reality of it. It gives the facade of serving others but exists primarily to serve ourselves. In the end, niceness only makes us into “whitewashed tombs” (Matt. 23:27)—pristine on the outside but empty within.

In addition to being a false virtue, niceness radically diminishes our Christian witness. Author Randy Alcorn describes it this way: “We’ve been schooled that it’s inappropriate to say anything negative. Being a good witness once meant faithfully representing Christ, even when it meant being unpopular. Now it means ‘making people like us.’ We’ve redefined Christlike to mean ‘nice.’”

Not surprisingly, this false idol has shaped the reputation of Christians throughout the world. Alcorn goes on to say, “Many non-believers know only two kinds of Christians: those who speak truth without grace and those who are very nice but never share the truth.” In other words, niceness is one of the reasons our gospel message is uncompelling and our witness limp. Niceness is a false form of spiritual formation that has crept into the church, seduced Jesus’ followers, and taken much of the power out of our lives. It is one of our generation’s favorite idols, and it is high past time to name it.

After observing the fruit of this false idol in my own life, here’s what I have concluded: I cannot follow Jesus and be nice. Not equally. Because following Jesus means following someone who spoke hard and confusing truths, who was honest with his disciples—even when it hurt—who condemned the hypocrisy of the Pharisees and turned over tables in the temple. Jesus was a man who went face-to-face with the devil himself and died on a cross rather than succumb to the status quo.

We exist in a world that swings between sweetness and outrage, two behaviors that seem to be at odds with one another. In reality, they are two sides of the same coin: a lack of spiritual formation. When our civility isn’t rooted in something sturdy and deep, when our good behavior isn’t springing from the core of who we are but is instead merely a mask we put on, it is only a matter of time before the façade crumbles away and our true state is revealed: an entire generation of people who are really good at looking good.

The solution, however, is not to trade in our appearance of niceness for an appearance of boldness. We have to go deeper into Christ.

Jesus was loving. He was gracious. He was forgiving. He was kind. But he was not nice. He was a man who would leave the 99 sheep to rescue the one, but he was also totally unafraid of offending people. Jesus understood the difference between graciousness and personal compromise, between speaking truth and needlessly alienating people. Rather than wear a shiny veneer, he became the embodiment of rugged love. This, not niceness, is what we are called to. 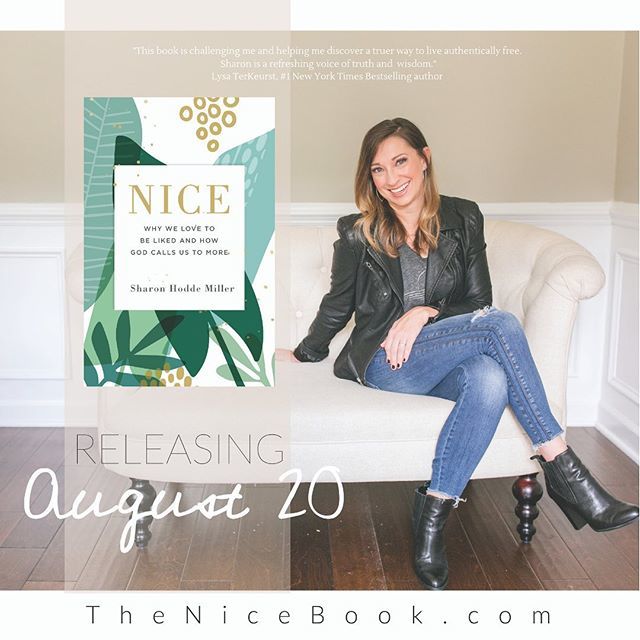 Sharon Hodde Miller, PhD, is a writer, pastor’s wife, and mother of two. She is the author of Free of Me: Why Life Is Better When It’s Not About You & Nice: Why We Love to Be Liked and How God Calls Us to More, from which this essay was adapted.

Do you love this? Want to see more? Consider becoming an iPartner with KCBI! GIVE NOW

How To Disagree Agreeably

Fighting For Closeness With God

When Famous Christians Lose Their Faith